Please note our Victorian showroom is open by appointment only – call 03 8786 0000. Our Queensland showroom is currently closed. Get in touch

Take a look into a recent feature project, where we collaborated with Smart Homes to deliver a custom glass conservatory for a showcase display home.

Finding the perfect home can be a real challenge. At least, it used to be. It’s not too difficult when you’re dealing with Smart Homes one of Australia’s longest-established and most-experienced custom home builders.

Smart Homes specialise in building dream homes. And a large part of their approach involves dreaming up and then designing and developing exciting new features. It’s all about premium inclusions to keep every home unique.

We recently collaborated with the team to bring two showcase properties to life at the new Clydevale estate, south east of Melbourne.

The whole process was captured on an upcoming episode of 7TWO’s ‘Before & After’, and we spoke to Travis from Smart Homes to get the inside scoop on how everything came together.

There are two Smart Homes display properties at the Clydevale estate; the ‘Laila’ and the ‘Jack’. The ‘Jack’ home is inspired by the Hollywood regency era, featuring columns, rusticated renders, and an understated Hamptons styling, while the weatherboard façade of the ‘Laila’ takes style cues from Edwardian federation. 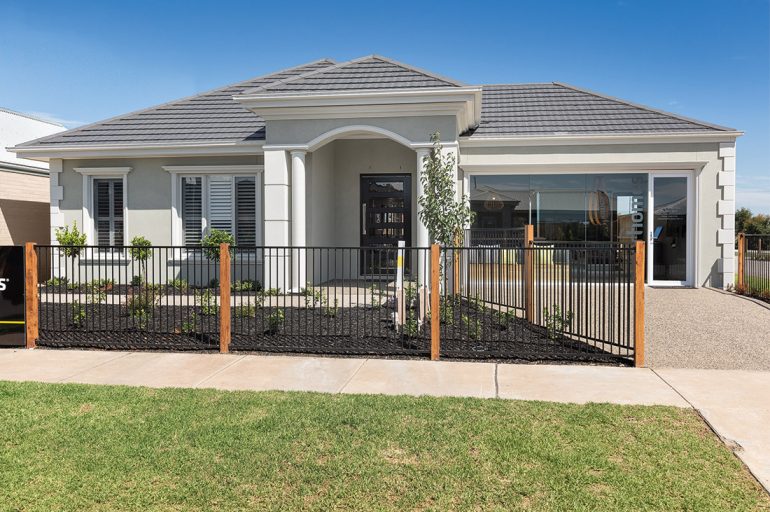 The front façade of the ‘Jack’ display home.

Travis says: “It’s a style of home that never gets outdated. We rarely have to re-invent things – and we’ve got options to help customise things for our customers.”

Some of those custom options include an upstairs loft, heightened ceilings, fireplaces, and bay window stylings. But the undoubted showcase piece is the Laila home’s glass conservatory.

The front facade of the ‘Laila’ home at Clydevale.

“The Laila display home – with the option for the conservatory – we’ve had for around five years and it’s been a very
successful home. It’s like a Swiss army knife.”

So how do you make the ‘Swiss army knife’ of display homes look even sharper?

“Because it’s been so successful, we decided to improve it by adding a conservatory.”

And that’s where we stepped in.

Travis continues: “We had the idea for the conservatory—it was actually a concept that came from discussions with a client we built for. Then it became a case of looking at the variety of products A&L could offer us.” 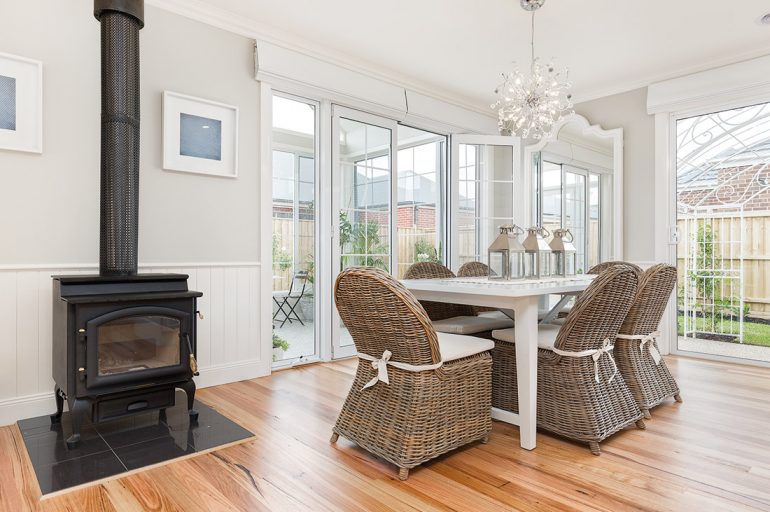 Looking across the dining room into the entrance of the conservatory.

“We needed to consider how the conservatory was going to be built from a structural point-of-view. But we also wanted to develop it with as much light as possible.” 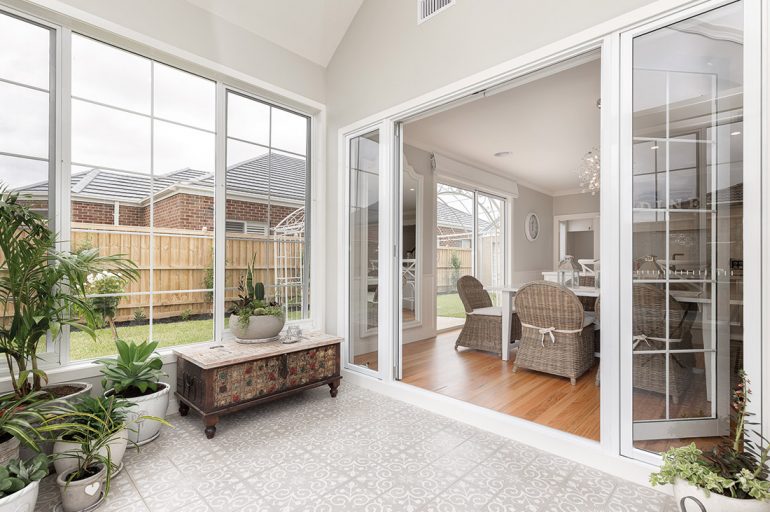 The view from inside the conservatory.

“There weren’t too many challenges in the process. The products available—because there’s a huge amount and range of products A&L offer —it just came down to establishing the style and size of window we needed to complete the feature.”

“Being able to go into the A&L showroom and discuss the windows required for each individual job in detail, that’s a huge advantage for our company.”

“It was a process of looking at the space, how the structure would come together, what products would be required to get the conservatory built the way we wanted, and what we’d need to fit all the windows in. Because of the huge range, it was easy.” 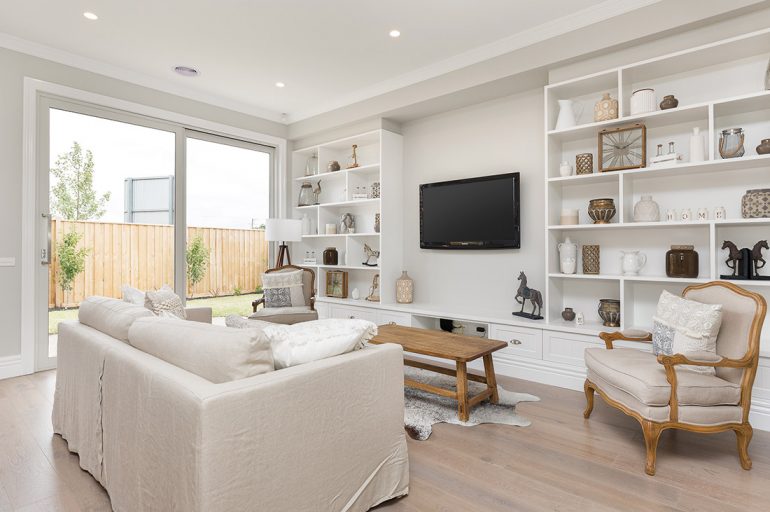 Both homes feature a number of A&L products beyond the conservatory, including Boutique Aluminium Sliding Doors.

“Although, we did have to custom-make the gable windows, the triangular shaped product. We purpose-built that solution with A&L.”

“Again, that custom-build was a process of establishing ‘what’s going to be the process to get these windows ordered, delivered, and what are the timeframes we need to work to?’ We need to check-measure our windows on site and establish lead-times. There was some complex coordination involved in getting that happening.”

A clear and open approach

Like the glass conservatory itself, the success of our role in the Clydevale project was based on transparency and openness.

“The main reason I use A&L as a supplier is because of the relationship we’ve got; it’s open and honest.”

“The process is about communication. We keep up-to-date with all of the call out timeframes. We’ll touch base with
A&L directly and they’ll say ‘look, we’re two weeks out, three weeks, four weeks’ – whatever it is for the product. So we know what the timeframes are. We’ll call up the job, get it into the system and that way we can push things back a week or so if needed. We can
shuffle things around.”

While the conservatory is a showcase feature, our involvement didn’t stop there.

There are a range of A&L products used in both homes, and multiple highlight features throughout both the ‘Jack’ and ‘Laila’.

Many of the solutions create the classic French, or provincial, aesthetic. Although that’s typically achieved with timber, aluminium offers the same style with impressive durability and low maintenance.

“The majority of the house features aluminium. We had so many options for the conservatory, but we ended up choosing aluminium windows with colonial bars. We’ve got sliding doors: the Boutique Sliding Doors let a lot of light in.” 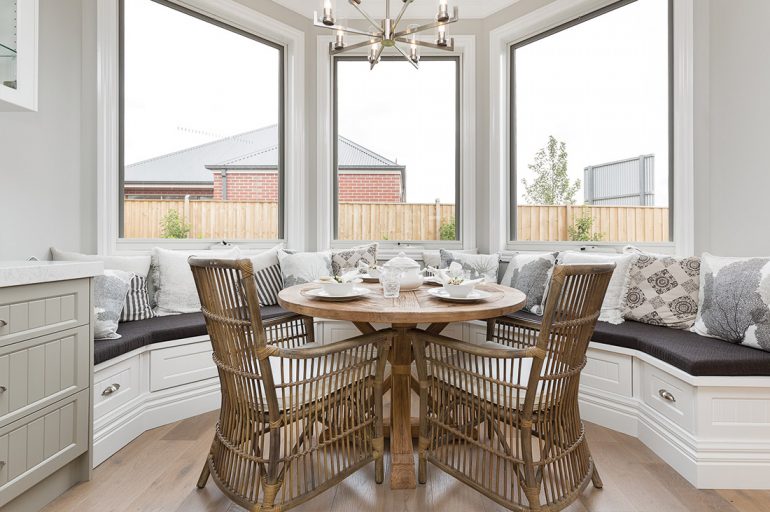 While the ‘Laila’ has the custom built conservatory, the ‘Jack’ home features bay windows to create a family space set aside from the kitchen.

“As part of including a dining area in the kitchen we played with the idea of having the dining table come off the kitchen bench, but we ended up settling on a ‘breakfast nook’. It allows everyone to be in the same space. And those windows, with that light, you just
feel like a cat sunning yourself in the afternoon. It’s gorgeous.”

Viewing the bay windows and breakfast nook from the kitchen area.

With the project complete and the Smart Homes episode of ‘Before & After’ airing soon, we’re excited to continue working together.

“And the quality of the products is second to none. We hardly ever get any call-backs on our windows. The quality is always really high.”

If you’re keen to learn more about the Clydevale project, keep an eye on 7TWO between late March and early April for screenings of the episode. Alternatively, you can take a virtual tour of each display home.

Otherwise, look out for more collaboration between our team and Smart Homes in the future, or get in touch if you’ve got an exciting project of your own.

Back to top
Enquiry form